You are here: Home / unclassfied 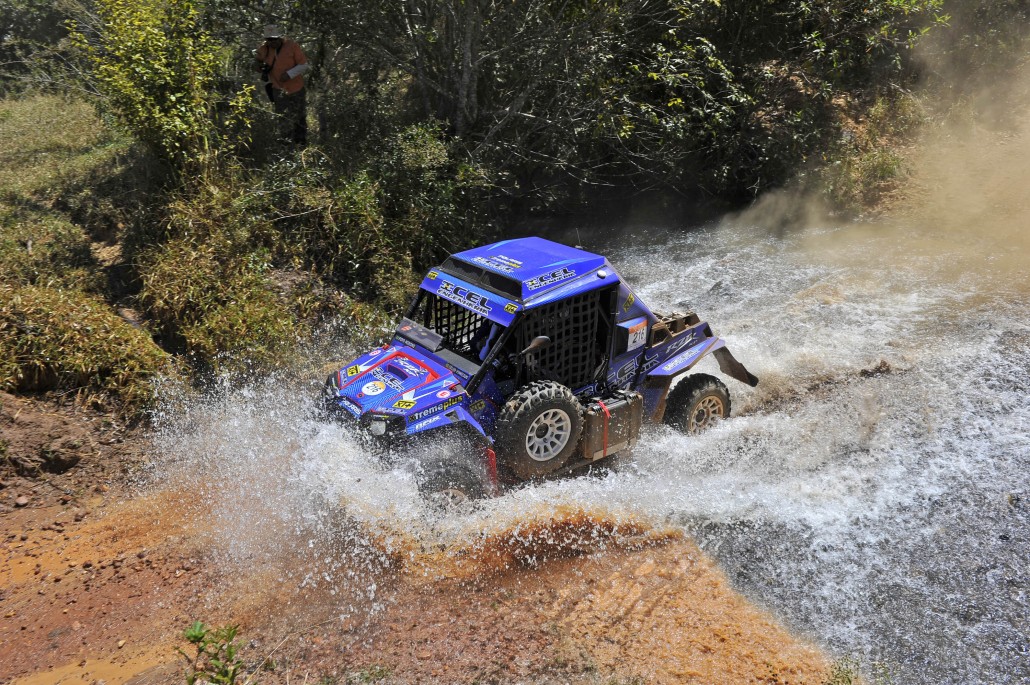 The first special stage of the Rally Dos Sertoes joined Goiania and Caldas Novas, a town where its hot springs attract many tourists. During this first racing session of 155 km, some damages were registered among the competitors: burn engines, joints, direction, and some other problems.

For the Xtremeplus team, Celio VInicius Oliveira and Pipo Mirone took some advantage and finished this relatively difficult stage in the third place.

Celio Vinicius Oliveira / Pipo Mirone n°216 in 2h09’56, 2’54 from the winners, n°203 Varela/Arena: “During the tests, and thanks to Marco, I learned many things that I applied today. I am making progress and can steer the RZR better. I also drove faster than yesterday, but without taking unnecessary risks.”

Carlos Ambrosio / Carlos Eduardo Piacentini Sachs (Cadu) n°204 — 6th in 2h12’25, 5’23 from the winner: “It was very fast special stage, on laterite tracks with many bumps and creeks to cross. I almost took the car to the limits and, today, my driving was more aggressive.”

Monday, the Dos Sertoes Rally continues its road towards Catalao, with a special stage of 260 km, with a selective section of 202 km. 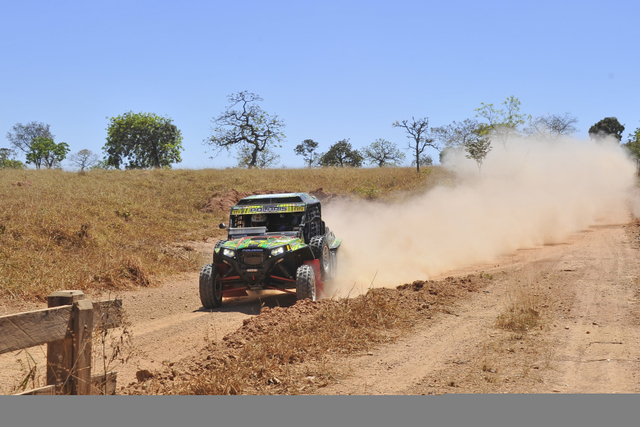 The sun is already high in the Brazilian sky when the first competitors take the laterite road of the prologue that lasted for about 10 km, relatively fast.

Carlos Ambrosio / Carlos Eduardo Piacentini Sachs (Cadu) N°204 – 12th: “For me, the prologue is better than last year. It was a true mini special stage with jumps, creeks to cross… The RZR900XT+40 is perfect and its suspensions are extraordinary. This time, I feel ready to face the Rally Dos Sertoes in the best conditions.”

Celio Vinicious Oliveira / Pipo Mirone N°216 – 13th: “The Prologue was very short and it lasted only seven minutes, it was a bit frustrating and I will be glad to attack the true special stages. My shoulder did not hurt, which is my problem at the moment. The navigator and the driver are in great shape and so is the car. I can’t wait to be in the first selective section!”

Leandro Torres / Idali Bosse N°208 – 15th: “I feel perfectly comfortable when I drive the RZR900XT+40, but the prologue was more difficult and faster than the tests we did before. My strategy is to make it to each bivouac and I have the right car to attain my goal.” 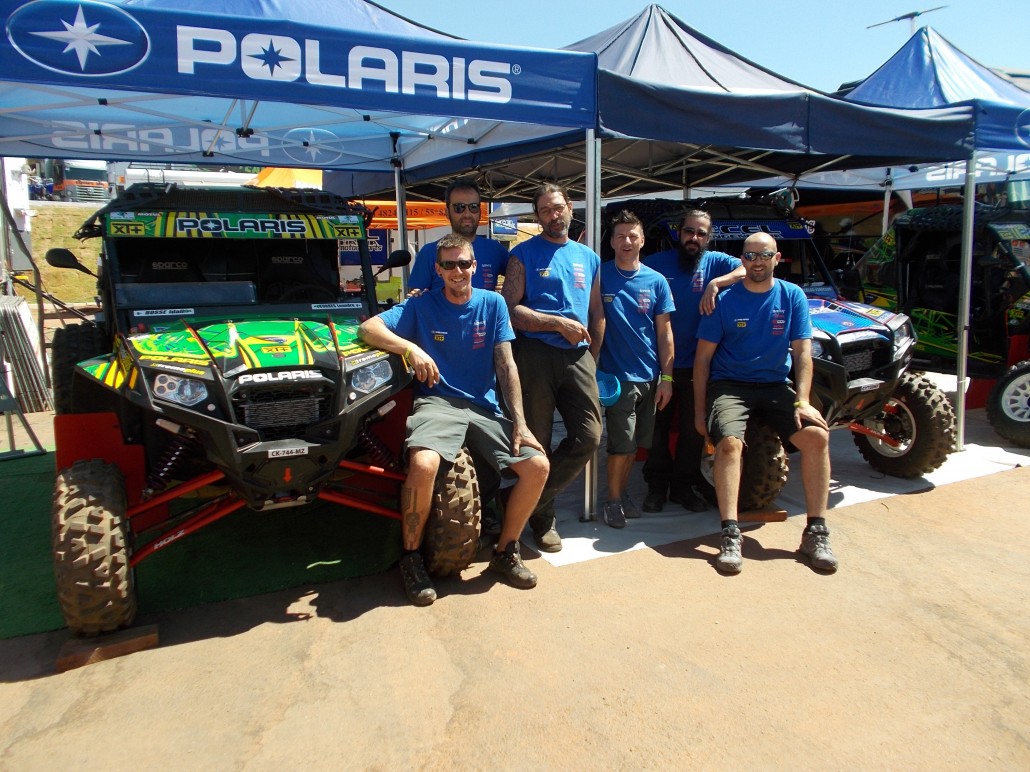 After two days of technical and administrative checks in the city of Goiania at the Ayrton Senna International Speedway, the Dos Sertoes Rally race starts today by a prologue that will define the starting order for the first special stage on Sunday. For its 22nd edition, the Rally Dos Sertoes has about 180 participants, 22 of them in the SSV class, T3 FIA – UTV in Brazil.

All three Xtremeplus crews take part in the Brazilian championship driving Polaris 1000 and were along a test session, which gladly surprised the performances of the RZR 900XT+40, especially for the efficacy of its suspensions.

Tomorrow, all competitors will launch for the first special stage of 150 km, announced as a fast track stage. This years’ rally will contain 2600 km between Goiania and Belo Horizonte, and 1572 km will be timed. The race will take the competitors through Caldas Nova, Calalao, Paracatu, Sao Francisco and Diamantina. 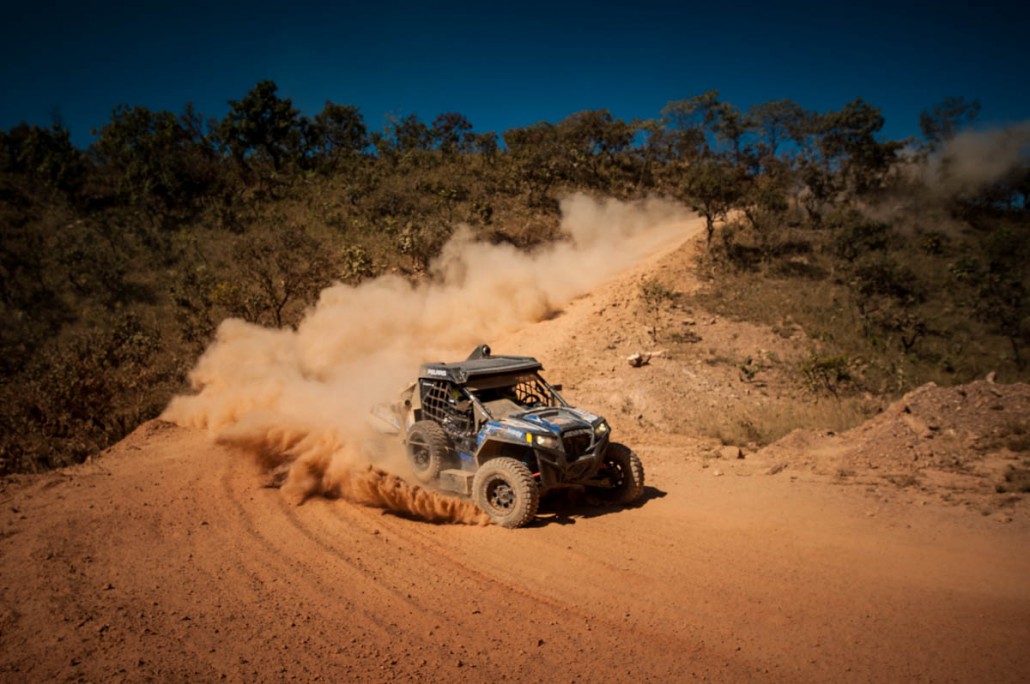 After two days of verification at the international speedway Ayrton Senna in Goiania city, the Rally Dos Sertoes starts today with the prologue, which sets the starting order for the 1st stage, which will take place between Goiania and Caldas Novas on Sunday. There is more than 200 participants this year and 22 in the T3 category (UTV). The three Xtremeplus crews Carlos Ambrosio / Carlos Eduardo Piacentini Sachs (Cadu) n°204,
Leandro Torres / Idali Bosse n°208 et Celio Vinicius Oliveira / Pipo Mirone n°216 will race 2600 km and 1572 of timed sections from Goiania to Belo Horizonte through Caldas Nova, Calalao, Paracatu, Sao Francisco and Diamantina. 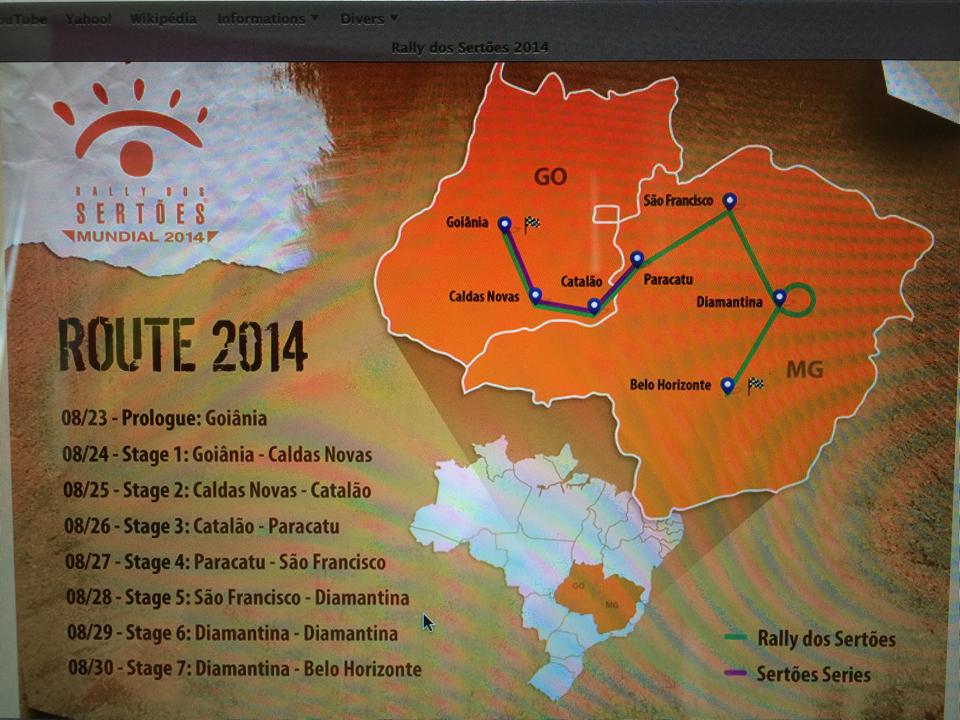 The first stage of Baja Aragon was quite difficult for the three crews of the Xtremeplus Polaris Factory Team that dealt with several punctures, and Jes Munk broke the transmission housing due to a driving mistake.

Saturday night, there was some action in the team Xtremeplus after Jes Munk arrived pulled by Marco Piana. After many inactive hours, the mechanics put their sleeves up with all of their passion to work on the RZR 1000XT30, and get it ready and set for the start the next day.

The second stage of Baja Aragon had the exact same configuration of the first: two special stages and the same amount of kilometers, but in a terrain broken by the passage of trucks that created holes in the fesh-fesh.

After three days of the race, the Xtremeplus Polaris team takes out a positive outcome. The three crews stand on the podium, including the new machine. The RZR 100XT30 wins its class on his first time out on a race!

Jes Munk/Sebastien Delaunay N°54 – 33th and 1st in T3, 12h58’27 (overall ranking): “Yesterday, in the second special, I was going well for 100 km, and then I passed a turn straight and in reverse, mad, I did not look behind us and I hit something that broke the back chain, which broke a transmission housing. It´s my fault, the machine worked so well. The mechanics worked late at night to make the RZR as new and I thank them for the excellent work.

This morning, I took off with a new gear box, shorter, which fits me better. Than the second special I had only one puncture at a place where I was obligated to run on a gully full of stones. None of the belts were broken today. I think I started to understand how to steer the car, I go faster and I do not drive like I do on the bike! The Polaris RZR 1000TX30 is a fantastic toy and I am glad for Xtremeplus to have won the T3 class!”

Daniel Viard/Alain Multinu N°65 – 35th and 2nd T3 13h57’12 (overall ranking): “There are always so many stones, but today, they were hidden in the fesh-fesh. This morning I went like if I was trekking, and I still managed to get a puncture.

This afternoon, I had one puncture but with no suffering this time, and I really enjoyed. I discovered the Baja, a race that is part of the FIA World Cup, and it is another dimension from what I know. With that said, I would have liked to have another day. The Polaris RZR 900XT40 is a truly racing machine, and I thank everyone in the team for their work accomplished in these three days.”

Marco Piana/Steven Griener N°57 – 37th and 3rd T3 14h30’44: “I am very happy that this weekend in the Baja, the three cars made it to the finish line. We intended to test the RZR 1000XT30 and it went very well. I am also happy of the performance of Daniel Viard, who raced in a Baja FIA for the very first time, and with us! Perfect race, and thanks everybody!” 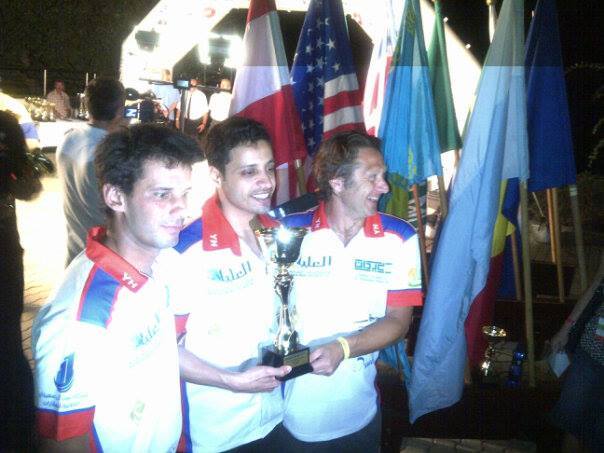 The Saudi driver opens the national hall of fame in motorsports as he obtains the first FIA World Cup title for Saudi Arabia. Yasir is the new FIA Cross Country Rally World Champion of the T3 class.

“I am proud to be the first Saudi to earn a FIA World Championship title, and I hope that this is only the first of many others to come! For me, the 2013 was outstanding. I joined a French team, very professional, Xtreme+ Polaris, the best in rally raid. Thanks to them, I won several FIA World Cup events: Hail Saudi Baja, Abu Dhabi Desert Challenge, Sealine Cross Country Rally, Oilybia Rally in Morocco, and finished the Hungarian Baja in the second place,” tells Yasir.
“The Polaris RZR 900 XP40 prepared by Xtreme+ is an amazing machine, no gear, easy to brake and   to steer. You have to understand it and respected, and once you make it your own it can take you anywhere with its incredible suspension. It is a truly great machine; it goes fast in difficult tracks, a little slow in road connections or fast tracks, but very safe.”

Yasir Saedan is used to participate in competitions in his own country, so for him, 2013 was the first international season. “This year, I also discovered a new discipline: cross country rally. It has been a fantastic experience that has shown me new countries, new cultures and new friends… 2013 will be a year that will remain in my memory for a very long time… and the year of my first title!”